Athens, Ga. (July 22, 2020) – Barberitos, a fast-casual restaurant with 50 locations across the Southeast, is excited to announce Joel and Jack Kennedy from Tallahassee, Fla. as the #PollacksPics contest winners. The national promotion, which ran as part of the chain’s 20th anniversary, invited Barberitos and college football fans alike to post a selfie with a life-size David Pollack standee located in each restaurant.

The entire Kennedy family was invited to the Barberitos headquarters in Athens to meet Pollack, who is an ESPN broadcaster and former NFL player. The winning photo of five-year-old Jack Kennedy and the Pollack standee was submitted by his father Joel Kennedy. The family won a VIP card providing free Barberitos for a year, along with numerous other gifts.

“The #PollacksPics promotion was a great way for us to engage and interact with fans of the brand as we kicked off our 20th anniversary year,” said Barberitos Founder and CEO Downing Barber. “It was fun seeing social media light up with photos during this promotion, and Jack is certainly a worthy winner.”

For more information about Barberitos, the company’s food, health information, locations, franchise opportunities and its commitment to people and community, please visit www.barberitos.com. 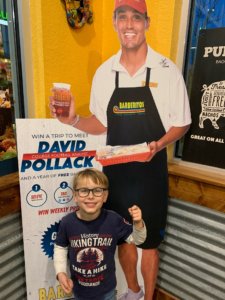 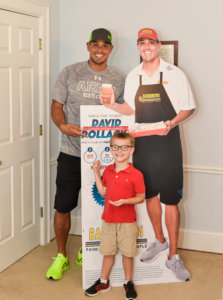 About Barberitos Southwestern Grille and Cantina

Barberitos has a mission to serve others with a focus on Food, Community and People. Through exceptional service, Barberitos aspires to become the market leader of the quick-serve burrito industry. The chain is dedicated to serving fresh, high-quality food in an efficient manner. With a focus on farm-fresh food, all of Barberitos’ menu items are made in-house daily including the hand-smashed guacamole. Founded in 2000 by Downing Barber, Barberitos has grown to 50 locations in seven southeastern states. In 2017, Nation’s Restaurant News included the chain in its “Next Restaurant Brands” list. For more information about the company or franchising opportunities, please visit www.Barberitos.com.